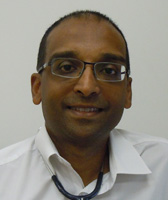 Dr Suresh Sivanesan is a staff Gastroenterologist and Director of clinical research in the Department of Colorectal Medicine at the Royal Melbourne Hospital, Victoria. He is a visiting specialist at the Royal Darwin Hospital and is affiliated with the Epworth Hospital in Melbourne.

Finally he was awarded a scholarship by the Australian body of gastroenterologist (GESA) to further train in endoscopy at St. Mark’s Hospital in London. His areas of interest include inflammatory bowel disease, cancer screening /surveillance and small bowel diseases.

Dr Guru Iyngkaran is a Gastroenterologist based at the Royal Melbourne Hospital. He has been a visiting specialist at the Royal Darwin and Darwin Private Hospitals since 2009 where he provides inpatient, outpatient and endoscopic services.

Along with Dr Edmund Tse and Dr Suresh Sivanesan, he has set up the Gastroenterology Department at the Royal Darwin Hospital and is active in promoting this service as well as conducting research in the Northern Territory in collaboration with CSIRO and the Royal Melbourne Hospital.

His other areas of interests are bowel cancer, functional bowel disease and liver disease. 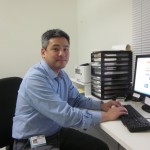 Eddie has helped to establish a gastroenterology department at the Royal Darwin Hospital over the last three years, now staffed with two senior chronic disease nurses as well as a gastroenterology training program, supervising a third year advance trainee in the completion of his specialist program. 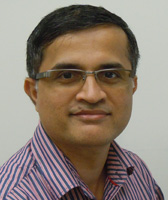 Dr Narayan Karanth is a Medical Oncologist who has been providing oncology care at Darwin through Royal Darwin Hospital & Alan Walker Cancer Centre since May 2010. He also provides comprehensive Medical Oncology care through the NT Medical Specialist consulting suites and inpatient consultations at both Royal Darwin Hospital and Darwin Private Hospital and Chemotherapy services.

He also provides his service as a Lecturer at the School of Medicine, Faculty of Health Sciences, Flinders University, Adelaide, SA. He is also actively involved in the training process of advanced as well as basic physician trainees at Royal Darwin Hospital. His special interests include breast, lung, colorectal cancer and urogenital cancers. 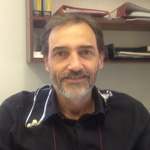 Dr Elio Gagliardo works as a senior consultant in General Medicine at Royal Darwin Hospital, where he is also responsible for the acute medical clinic.

His special interests include cardiology, arrhythmology and rheumatology..

Dr Emma Hiscutt is a Dermatologist. She holds public positions at the Alfred Hospital and Peter MacCallum Cancer Centre in Melbourne.

Emma undertook her undergraduate medical training at Cambridge University in the U.K, where she was awarded BA medical sciences. She then went on to complete her medical training at the University of Oxford, where she was awarded BM BCh. She then completed both her Membership of the Royal College of Physicians (MRCP) and specialist training in Dermatology. In 2009 she moved to Australia and after further assessment was awarded Fellowship of the Australasian College of Dermatology in 2013.

Her interests include skin cancer, medical dermatology including connective tissue diseases and skin of colour. 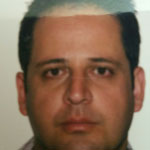 Dr ABU- ASSI was born in Darwin and spent his entire schooling in Darwin.
Dr Abu-Assi attended Holy Spirit Primary School and St John’s College.
He left Darwin at the end of year 12 to start medical school at the University of Adelaide.

Following medical school, he worked for a year at the Royal Darwin Hospital. Subsequently, he embarked on paediatric gastroenterology training, completing a PhD in the epidemiology of Australian children with inflammatory bowel disease. He then went on to work at the Hospital for Sick Children in Toronto, Canada.
Dr ABU- ASSI currently holds positions in Adelaide Paediatrics, Royal Darwin Hospital and at NT Medical Specialist. 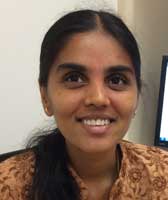 Dr Kanakamani Jeyaraman was born in India and moved to Darwin 3 years ago. Her endocrine training was at India’s premier institute, All India Institute of Medical Sciences. She was then practising as a consultant at Christian Medical College, a renowned tertiary care teaching hospital at India. After moving to Darwin, she started as a tutor at Flinders’ Northern Territory Medical programme and also worked as a Senior Research Officer at Menzies Institute of Research.

She worked as a Senior Registrar at the Royal Darwin Hospital between February 2014 and 2015. Following this period of peer review, she was awarded fellowship at the Royal Australian College of Physicians. She currently holds public positions at Royal Darwin and Alice Springs Hospitals. Her special areas of interest are adrenal disorders and obesity.

Dr Alvaro Cervera is a Consultant Neurologist working at Royal Darwin Hospital. He works as a general neurologist with a main interest in stroke. Other interests are migraine and other headaches, epilepsy, movement disorders and multiple sclerosis.

Dr Cervera completed his medical studies at the Autonomous University of Barcelona, Spain, in 1996. He trained to be a Neurologist at the Hospital Clinic of Barcelona, Spain, in 2001. Later, he performed stroke fellowships at the same hospital and in Austin Hospital, Melbourne, in 2008. In addition, he got his Ph.D. studying the effect of anticoagulation and the inflammatory responses after acute ischemic injuries in 2007. Other complementary studies are a Diploma in Design and Statistics in Health Sciences and a Graduate Diploma in Tropical Medicine and Hygiene.

Since 2009 he has worked as a Neurology Consultant in Spain (Hospital Clinic of Barcelona) and the United Kingdom (East Sussex NHS Trust and Southmead Hospital in Bristol). He moved to Darwin in September 2017.

He is Fellow of the Royal Australasian College of Physicians and Fellow of the European Stroke Organization, Also, he is member of the Australian and New Zealand Association of Neurologists, Spanish Neurology Society, and World Stroke Organization. He has multiple publications, mainly in the stroke field, and published abstract in numerous international meetings. 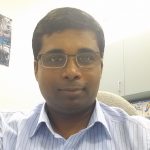 Dr Madhi Sundaram is a General Physician and Nephrologist and is a pre-eminent senior staff specialist at the Royal Darwin Hospital.  He has been working as a consultant in the Division of Medicine since 2011 and works in General Medicine and Nephrology specialities at the Royal Darwin Hospital. Dr Sundaram has been consulting from NT Medical Specialist since June 2016.

Dr Sundaram underwent his renal training at Christian Medical College, Vellore, India a major tertiary care unit that caters to a large referral base in South Asia. He also worked as a consultant there for 5 years before moving to Australia.
Dr Sundaram has a wealth of expertise in managing complex nephrological issues, dialysis, acid and electrolyte disturbances, transplantation and immunosuppression. He has authored/ co-authored about 40 publications in several peer-reviewed medical journals and nephrology textbooks. He is also a reviewer for a research journal is a co-investigator/ additional investigator for several multi-national clinical trials.

He has a special interest in immunological and genetic conditions and is a member of KIDGEN, a national consortium investigating hereditary renal disorders. Dr Sundaram also completed a master’s in diagnostic genomics and can help in identifying appropriate genetic tests and interpretation for at risk subjects.

Dr Sundaram has a keen interest in teaching and has been involved with training medical students and postgraduates.
He will do his best to see the patients at the earliest convenience once referrals are made.
Qualifications: MD (Medicine), DM (Nephrology) DNB (Nephrology) FRACP, GraddipBiostat, MastDiagGenomics. 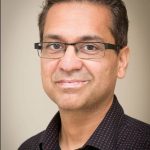 Dr Tayal is a Consultant Physician Rheumatologist and a fellow of the Australasian College of Physicians. He has been providing adult Rheumatology services at RDH since 2014 and is currently providing a Rheumatology VMO service at RDH. He has vast experience in managing complex rheumatology patients at the top end. His special interest include inflammatory arthritis like rheumatoid arthritis and gout. 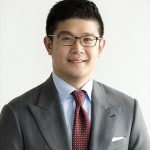 He graduated from the University of Adelaide and completed his Respiratory training at the Queen Elizabeth Hospital, where he was also the Chief Medical Resident. He went on to complete his Sleep fellowship at the Australian Institute of Sleep Health (AISH). He holds Specialist accreditation with the Australian Health Practitioner Registration Agency and is a Fellow of The Royal Australasian College of Physicians.

Dr Oh has served on the SA/NT Executive Board of the Thoracic Society of Australia and New Zealand and is a current member of the Australasian Sleep Association’s Advanced Trainee Education subcommittee.

Mr Suraj Rathnayake obtained his MBBS in 2004 from university of Peradeniya, Sri Lanka. He completed his General Surgical training in Sri Lanka obtaining his MD surgery in 2011 and Board certification as a Specialist in 2013.He also obtained MRCS in England in 2011 and done a fellowship in minimal access surgery in India.

Before moving to Australia, he worked in Sri Lanka for four years as a consultant General surgeon. In 2018 he started working in Royal Darwin Hospital and obtained his FRACS in 2020.

He is accepting referrals for general surgery including Gallbladder, appendix, skin lesions, Thyroid surgery, Vasectomy, and other scrotal surgeries. Mr Rathnayake is happy to consult and advise on a spectrum of surgical conditions in children within the ambit of credentialing and scope of practice in regional hospitals.He prefers not to receive referrals for melanomas and Breast surgeries.

Do you have a question for the team at NT Medical Specialist? We are here to help. Please click on the link below to email us. 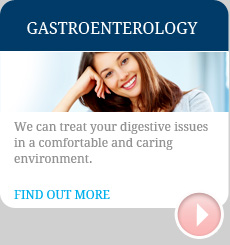 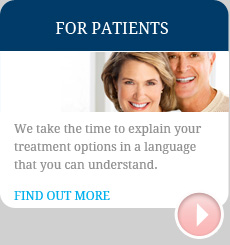 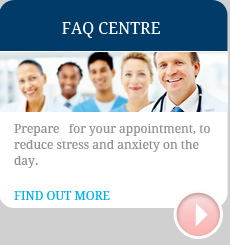